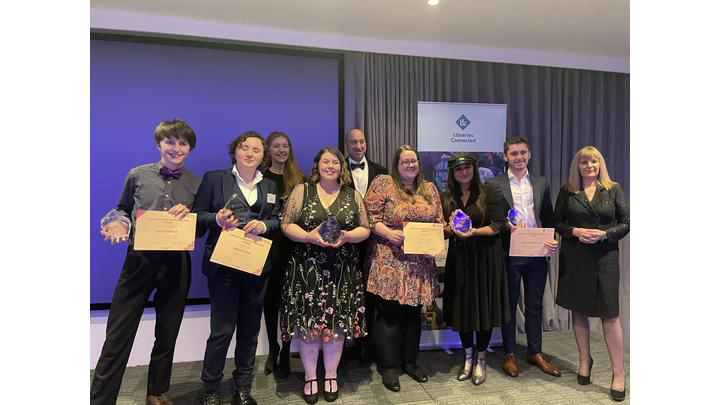 Vision Redbridge Libraries was delighted to win an award for ‘Health & Wellbeing’ at the first ever awards event hosted by Libraries Connected, a membership organisation for public libraries in the UK. The ceremony aimed to recognise and celebrate the achievements of library staff over the past year.

Redbridge Libraries and its partners received the award for their hard work on the innovative project, The Death Positive Library. They were recognised for promoting the role of libraries as powerful and compassionate spaces to support conversations around death, dying and bereavement and the way the team developed its services and went beyond expectations to provide essential services to residents during lockdown.

“We are delighted that the work of the Vision Redbridge Libraries has been recognised for this prestigious award. The team have demonstrated determination, creativity and innovation in tackling this difficult subject during these very challenging times. This award joins the many others that the library service has received in recent years and we are so incredibly proud of their efforts.”

The Death Positive Library Project is a collaboration between Redbridge Libraries, Kirklees Libraries in Yorkshire, Newcastle Libraries and a research team from Northumbria University made up of Dr Stacey Pitsillides in the School of Design and Dr Claire Nally in the Department of Humanities. The project explores the role of public libraries as compassionate, safe and trusted spaces to support conversations about a topic that is often considered taboo by many.

Over the last few months Redbridge Libraries have hosted a series of online book events, film screenings, reading lists, and virtual cafes. Most recently, the libraries team have launched a digital experience called Tickets for the Afterlife which explores a range of choices for what to do with your body, memories and legacies that span the past, present, future of death and dying. The installation is available to experience at Redbridge Central Library until 19 November.

Find out more about the project at www.visionrcl.org.uk/death-positive-library